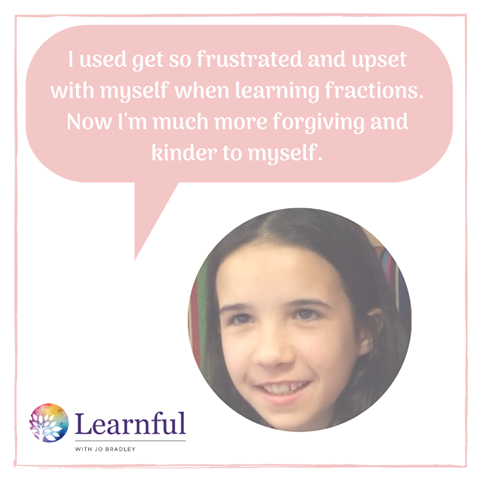 How do we help children to learn when they’re frustrated?

2. Knowing what to do with the feeling of frustration is the second step.

3. Noticing the thoughts and words that you produce when you’re frustrated is the third step.

4. Giving yourself a little nod or smile because you’ve noticed Step 1,2,3 and you’re now pleased with yourself because you’ve wised up to what’s going on is the fourth step.

5. Realise your frustration has now been replaced with compassion and continue with the job in hand. Learning now becomes EASIER and more ENJOYABLE.

How many children can naturally do this?

This girl now can.

But has it happened naturally? No.

She was on a path of self-criticism, high expectations for herself, pressure to succeed and a desire not to fail – whenever she faced fractions. (It probably stemmed from a negative fraction experience back in Year 1 or 2 but that’s a whole other post!) Learning when you feel frustrated, with doubts about your abilities and ‘comparisonitis’ with other children in class is HARD. It makes learning HARDER.

What changed for her?

She was given a little time each day, to focus on herself. HER feelings, HER thoughts, HER actions and HER experiences.

She has been allowed, along with her classmates to notice and develop her self-awareness skills.

She has been able to join up the dots and realise what she was doing and how she was making it difficult for herself.

And she’s chosen to change things. She’s now in control and much happier for it.

If her school hadn’t invested in being a Learnful Member School, her and her classmates would be continuing as they always had – with emotions dictating and affecting their learning. No self-awareness, no empowerment and their self-belief resting precariously the outcome of each fraction completed.

Her school wanted a different way and wanted more for their children.

That’s why they became a Learnful School so everyone could develop and learn wellbeing skills needed to support them.

If you want more for your children and want them to learn how to help themselves though self-awareness, become a Learnful School.

It’s not too late to start in January, just drop us an email and we can discuss.

I think children deserve to know themselves and be given the chance to join up the dots so they can flourish emotionally and academically.